Predator 9000 and 8750: Which portable generator is the better option for you? Still, have no idea? Let’s scroll down to find the answer! 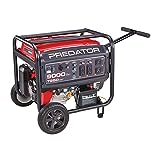 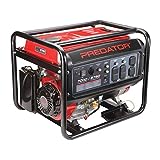 To kick off the comparing session, let’s begin with the power comparison. First of all, Predator 9000 and Predator 8750 both run by gasoline. Their engines are also 420 cc or 13hp OHV 4-stroke.

The Predator 9000 will be the winner in this section, as it appears more powerful than Predator 8750.

For operation, both models require you to traditionally start the engine by pulling the trigger. However, a plus point for Predator 9000 is that users can also operate the engine with an electric start.

The fuel capacity of Predator 9000 is much bigger than Predator 8750, which respectively is 8 gallons and 6,6 gallons.

To put it another way, Predator 8750 is more fuel-efficient than Predator 9000.

About the ambient noise level, both Predator 9000 and 8750 stay at 76 dBA. Similarly, two products provide a low rate of THD, which is lower than 5%.

If you prefer a compact generator, then the Predator 8750 will be your best choice.

Both Predator 9000 and Predator 8750 also offer a handle. Moreover, Predator 9000 provides a wheel kit for easier moving, which is more convenient than the other product.

Thirdly, to begin using these generators, you can start your Predator Generator 9000 by pulling a rope pull start as the generator. This goes the same with the Predator 8750.

Moreover, both Predator 9000 and 8750 are suitable for devices with 6 AC and 1 DC socket. Predator 9000 and Predator 8750 do not have the hour meter, which is one of their disadvantages since keeping track of the operating statistic data is necessary.

Overall, we consider that Predator 9000 will be the best choice for you between “Predator Generator 9000 vs 8750”.

To be more specific about why Predator 9000 wins over the 8750, the product is more affordable, powerful, and stable than the other.

We hope you choose yourself a suitable generator after reading this post!