In the recent market, ROLAIR JC10 Plus vs. JC20 is two popular models because of their superior features. Their strong, efficient, and quiet motors can satisfy most customers.

However, there are some differences among them which help you to sort out and decide which one is the most proper tool for your tasks. By this post, let’s find out which is the best option.

Differences Between Rolair JC10 PLUS vs JC20 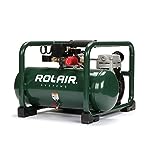 One of the most crucial factors to evaluate before buying a product is its portability. C10 PLUS weight of 39 pounds with the 17 x 16 x 15 inches dimension. The small, lightweight, and compact which makes them easy to carry around. The integrated roll cages can protect the machine from external damage.

On the contrary, the ROLAIR JC20’s dimension ranges 20 x 20 x 15 inches with 68 pounds. The machine is quite heavy and bulky, making it irritating for outside compressing tasks.

To be brief, the JC10 PLUS is more preferable for work because of their lightweight.

In terms of power engine, ROLAIR has never had an opponent due to its strong mechanism and high efficiency. For instance, the ROLAIR JC10 PLUS is equipped with a 115 Volt – 60 Hz motor which can vibrate to 2.35 CFM and 90 PSI. With that speed, the machine can work well with heavy-duty and industrial – level trimming to perfection.

Meanwhile, the ROLAIR JC20 is designed with a 2 HP motor that can deliver up to 90 PSI and 4.5 CFM. This 2-horsepower machine is capable of light-duty framing and trimming.

To conclude, it is evident that the ROLAIR JC20 has the most potent motor overall (4.5 CFM, 2HP). Users can comfortably use the machine for all tasks without worrying about poor performance.

Rolair JC10 is considered as one of the best air compressors recently because of its reliability and quietness. Attached to the machine is a manual which gains much positive feedback from customers for being so detailed and useful.

It’s also easy to install the spare parts and maintain them whenever needed. Besides, the manufacturers carefully prepared the daily/ weekly/ monthly suggesting maintenance schedule, so new users will not miss any critical testing.

On the other side, the portable oil-less ROLAIR JC10 PLUS compressors are an excellent choice for trimming and framing indoors.

With the Single Stage Compression mechanism inherited from the JC10 model, this item can not only provide power and portability of the traditional air compressors but also eliminate the loud operating noise from the older models. To be specific, the JC10 PLUS is called as “one of the quietest air compressors” because it only creates the 60dB noise when running.

Meanwhile, the ROLAIR JC20 is designed with an outstanding 2-horsepower engine. Thanks to this feature, JC20 is considered as the perfect choice for any framing and roofing work.

The new mechanism – two-cylinder pump – boosts the motor to the maximum efficiency. Attachments from the JC20 consist of a roll cage, a joined upward-facing gauges, cord wrap, and a valve that optimize the user experience.

Quick Rundown Of ROLAIR JC10 PLUS

By this post, we could go through some background information of three popular air compressors: ROLAIR JC10 Plus vs. JC20.

Every item has its strengths and weaknesses which makes it objective to decide which is the best. We believe that through the comparison above, you have already had your choice.

If we are about to choose one among these, we will go for ROLAIR JC20 because it has the most powerful engine that can be used for any task. To add-in, the structure is designed to enhance its motor to the highest limit.

Hopefully, this post has provided you with much useful information before making a purchasing decision