Firman P08003 and Firman P08004: Which portable generator is the better option for you? Still, have no idea? Let’s scroll down to find the answer! 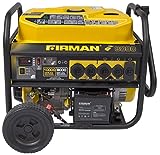 Firman’s two generators utilize the same motor: 439 cc Firman Max-Pro Series OHV 4-stroke. The inner power supply runs on a maximum capacity of 8 gallons of gas and can produce 8000W during typical running and 10000W in maximum gear-up. That’s quite robust for an engine of such a reasonable price!

Firman P08003 and Firman P08004, thus, are quite similar in their power output. They’re able to run for up to 12 hours while in their 50% capacity of use. Their energy consumption rounds up to 0,67 GPH, and their THD outputs are less than 25%, which can be detrimental for appliances a little on the sensitive side.

The two generators also emit 74 dBA of sound, so please keep this feature in mind before you rev your generator at 2 pm while the entire neighborhood is napping.

The most fundamental difference between Firman P08003 and Firman P08004 is their exterior design. Despite having the same output of power, there’s a stark contrast between the two generators of the same company.

Pitting their weight against each other also shows you that Firman P08003 is 2,3 pounds lighter than its companion, at 208 lbs. It means that this model is superior when you factor portability in your choice of device!

Both generators in question can be activated via one of these three methods: recoil starter, electric starter, and remote control. This feature allows the generators to have more flexibility and adaptability for all who choose them.

The part that stands out between the two models is the outlets. While Firman P08004 only provides for five devices at a time (as it has five alternate-current outlets), Firman P08003 can cater for six appliances at once. The increased power provision feature makes the latter generator way more well-known in its field.

And there you have it! Even though the Firman P08003 Vs P08004 concludes with the former model winning, each generator you’ve taken a look at today has its own strengths and weaknesses. Applying those attributes to the context you’ll be using the device in is key to finding the most suitable one for you!