DuroMax XP10000EH and DuroMax XP10000E: Which portable generator is the better option for you? Still, have no idea? Let’s scroll down to find the answer! 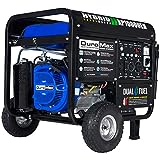 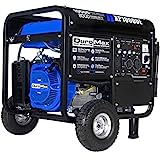 In terms of fuel type, the manufacturer has equipped the DuroMax XP10000EH with dual-fuel technology, which means this model can use two types of fuel to operate: gasoline and propane. Meanwhile, DuroMax XP10000E can only run on gasoline.

When powered by gasoline, DuroMax XP10000EH can produce a running watt of 8000W and a maximum of 10000W. But if you run this generator on propane, its rated watts and starting watts will be 6800W and 8500W, respectively.

Not only that, their exterior design is still quite similar. When compared to other competitive products, these devices look more eye-catching with a rectangular shape, black and blue body. The controls and power jack are also arranged similarly, making it easy for users to learn how to use them.

Besides, both XP10000EH and XP10000E have handles and wheels, making them convenient for users in the process of moving.

Both products share the same two boot methods, which are traditional towing and electric starter.

Noticeably, both models have a data control center that shows how much power is produced. There is also a fuel gauge on the body indicating when the fuel is running low. These features are evaluated as a very convenient function for users to track the amount of energy they consume.

From our perspective, the DuroMax XP10000EH seems to outperform its counterpart in terms of fuel and technology. Yet, it does not mean that XP10000E is inferior when compared to other portable generators in the current market. Hopefully, you now understand why DuroMax has a foothold in the generator market after reading our review about DuroMax XP10000EH vs XP10000E.