Further down the page, you’ll find some explanations regarding the key similarities and differences between the Bowflex T216 and the Bowflex T116.

But before checking out explanations regarding their specs and features here’s a table that summarizes the main technical summary sheet for these 2 treadmills: 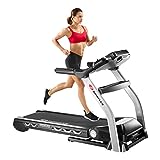 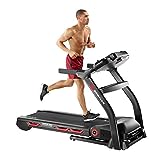 Firstly, let’s see how their prices differ? Overall, Bowflex T216’s rate is higher than Bowflex T116. The model T216 often goes to market in the range of around $1,999, while The Bowflex T116 model comes with a slightly lower price- around $1600. Hence, Bowflex T116 is the treadmill for you if you are on a budget.

Now, let’s compare the dimensions and weight of the two running machines. Generally speaking, Bowflex T216 does not differ much from the model Bowflex T116 in terms of size and weight.

What about the incline level? Overall, the Bowflex T216 model ties with its counterpart- Bowflex T116 in this rivalry because both Bowflex T216 and Bowflex T116 can adjust the incline range from 0% to 15%. Hence, both running machines are worth considering for anyone who wants to push the challenges to the next levels.

Both treadmills go with multiple pre-installed programs, yet, the number of workouts is less than many others on the market. To the Bowflex T216 model, there are 11 programs- 2 more than those of the Bowflex T116 model.

In terms of the engine power, the difference is not noticeable. Equipped with a 4 HP and 3.75 HP motor, respectively, the Bowflex T216 and Bowflex T116 can push the speed from 0 to 12 MPH at ease (19km/h), making it perfect for home users.

Eventually, both treadmills are equipped with large tread belts. The model T116 goes with a 20-by-60 running area, while its sibling has a 22-by-60 inch tread belt, which is the “golden-standard” size for the tread belt of all treadmills on the market. Hence, you do not have to think about uncomfortable running areas. Moreover, to help users land softly on the track, the technology on the tread belt of T216 is 5-cell Confort Tech Cushioning, while the Bowflex T116 only goes with 3-cell Cushioning.

For entertainment, the two treadmills have BlueTooth 4.0 tech connected to mobile devices, such as smartphones, earphones, and other smart apps. There are also speaker sound systems built on the treadmills.

In addition, the two treadmills also possess decent screens to assist you in tracking training information. However, the Bowflex T116 model comes with a 7.5-inch Full-Color Backlit LCD- 1.5 inches smaller than Bowflex T216. So, if you enjoy looking at a big screen, Bowflex T216 is a good option.

The two treadmills are also enabled with two famous apps – Result Series App and RunSocial App. In detail, the Results Series app allows users to track the performance quickly and easily just by a touch. To RunSocial App, it gives users access to many routes worldwide on Google Maps. Moreover, users can run with other users virtually, no matter where they are.

Being integrated into the consoles of the two treadmills are 3-speed automatic fans to chill users down.

Last but not least, the two treadmills integrate the Heart Rate Monitoring technology into the handlebars so that users can measure their heart rate just by a grip. In addition, the treadmills are compatible with chest straps.

Hopefully, this writing has explained the key differences between Bowflex T216 vs T116. Despite going to the market at a higher rate, Bowflex T216 is the more decent treadmill to purchase than its sibling- Bowflex T116.