DuroMax XP12000EH and DuroMax XP12000E: Which portable generator is the better option for you? Still, have no idea? Let’s scroll down to find the answer! 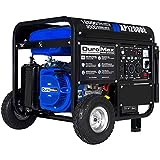 Like most generators, both Duromax XP12000EH and XP12000E run on gasoline. Moreover, DuroMax XP12000EH also has a dual-fuel feature that allows either gasoline and propane usage.

These products are all powered by a Duromax engine of 18HP 457cc and have a normal running capacity of 12000 watts and 9500 watts as a maximum while running on gasoline.

On the other hand, DuroMax XP12000EH operates by propane with 8075 watts and a maximum running capacity of up to 10200 watts.

But in propane, DuroMax XP12000EH’s gas tank can only supply enough energy for around 4 hours with a 20lbs fuel tank and consume 1.18GPH fuel.

In terms of noise, both generators produce the same amount of 72dBA, which is still acceptable.

However, they are not suitable for sensitive electric appliances due to their <12% THD.

Meanwhile, the DuroMax XP12000E has an equivalent dimension of 29 x 30 x 26 inches and weighs 7 pounds lighter than the other.

A plus point for the two generators is that they all provide wheel kits and folding handles for better lifting. Therefore, it will not take you much effort to move and transport them.

Once again, XP12000E and XP12000EH share some similarities in features.

The first resemblance between DuroMax XP12000E and DuroMax XP12000EH is their starting mechanism. They all have electric start and pull start to minimize some technical errors.

Moreover, you can feel completely assured about their electrical safety thanks to the covered outlets for protection.

They also pass EPA and CARB standards, which make you a true environment-lover customer.

The last difference between these generators is that DuroMax XP12000E provides customers with a low oil shut-up advance. Hence, this will help protect your investment by automatically shutting off the generator when the oil is low.

Overall, both DuroMax XP12000E and DuroMax XP12000EH are worth purchasing. And you may find it hard to discriminate between the two generators. Hence, the question of which to buy will depend on your preference and need.

But if you want insurance about the power supply, DuroMax XP12000EH is for you as it offers a dual-fuel tank. But if you care more about portability and usually travel for long distances, then DuroMax XP12000E is such a great choice.