Trying to make a hard decision between Generac 6602 vs 7122 vs 7143 for your home? Then come on board with us on this brief review to make your choice confidently!

The Generac 6602 uses a 212 cc OHV engine. This is a powerful engine manufactured by Generac, which can generate the highest water output at 2.8 GPM. On the other hand, the 7122 and 7143 models use pumping engines, which are less powerful than 6602.

The point of saying all these numbers? For you to calculate the cleaning units (C.U) of each machine: the higher the C.U is, the more efficient the washer is (Cleaning units = PSI x GPM).

The 6602, 7122, and 7143 have a similar design. All are constructed with a hand truck design with run-flat wheels contributing to their maneuverability.

Unlike the two newer models, the handle of the 6602 doesn’t offer rubber-padded, which provides a less confident grip. Yet, they all have good great mobility and comfort when using.

These machines have more similarities when it comes to accessories and functions.

A Chemical detergent tank can be found on all three models. While the 7122 and 7143 can hold up to 0.5 gallons, the 6602 exceeds by 0.25. They all come with a 30ft high-pressure hose and on-board storage with a hook to keep all accessories neatly when not being used.

Here are distinguished points among the Generac 6602 vs 7122 vs 7143. Regardless of using the same PowerDial control system, the 7122 and 7143 introduce PowerDial trigger gun, which is more convenient. With this, you don’t have to run back to the main unit to change the setting whenever needed.

Another point is that the number of nozzles on the two newer models has increased. Compared to only three nozzles on the 6602: 0o, 25o, and soap, the Generac 7122 and 7143 offer an extra 40o nozzle, Power Broom, and Soap Blaster. Not to mention, the 7122 provides a Turbo nozzle for special cleaning.

Soap Blaster: A nozzle that can produce a high-pressurized detergent stream that reaches three times farther than normal, penetrating stains for a satisfying result.

Turbo: Rotating pinpoint stream that works 30% quicker, suitable for removing stubborn dirt from tough surfaces such as concrete and brick.

The crown goes to the Generac 7122 for the number of nozzles. Even though the 6602 has a larger detergent tank and the 7143 has a quick electric start, they contribute less to the cleaning task’s efficiency. 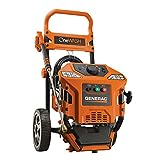 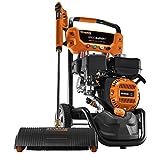 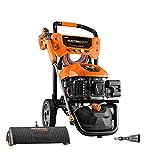 The battle of Generac 6602 vs 7122 vs 7143 ends in a close tie. Nevertheless, these machines from Generac are all great choices with high-quality control and wide distribution.

Still, I incline toward the 7122, which balances in both power and functions. Depending on your preference, if you have bad luck with recoil pull starter, skip the 6602 and 7122, and get the 7143 with a Li-ion battery for a hassle-free, electric quick start.

Tom Hiddleston has been a tool enthusiast and lawn care expert for the past 17 years.

First working with John Deere to reduce their impact on the environment, whilst building his love for writing in his spare time. Now, Tom runs the editorial team at Thebesthometools and tends to his garden in his spare time.

We are proud to be independent and in no way associated with manufacturers. To stay unbiased, we do not accept free products. We earn from advertising fees paid by retailers on qualifying purchases.

Find out more or adjust your settings.