Honda EU3000IS and EU2000I: Which portable generator is the better option for you? Still, have no idea? Let’s scroll down to find the answer!

Differences Between Honda EU3000IS and EU2000I

Like many other Honda inverter generators, both EU3000iS and EU2000i are run by gasoline. EU3000iS fuel tank capability stands around 3.4 gallons while that of EU2000i can hold only 0.9 gallons.

Both models have the Eco-Throttle, which allows the engine to automatically adjust to produce the power needed only.

Both models are marketed as super-quiet, and it turns out that they actually are. However, the engine of EU3000iS running at 100% load performs more quietly than that of EU2000i, respectively 58 decibels and 59 decibels.

According to Honda manufacturers, the THD (total harmonic distortion) of both models stays below 3%. This implies that they are suitable for sensitive electronic devices and systems.

Usually, Honda generators share a similar outlook, coating them with red and black colors. But at a glance, the EU2000i model has a more flexible and compact design.

It would be best if you purchase additional wheels for both EU3000iS and EU2000i, which will help move the generators easily as they are quite heavy to move around with hands.

To run the engine of EU3000iS, you can find the electric start button on the generator’s control panel and simply turn on the “On-Machine”. It can also be ignited when you manually pull the recoil on the side to get the EU3000iS run.

Being an old version in the Honda generator list, EU2000i can only be started by the manual recoil on the side of the machine.

Honda has always invested a lot to make the starting process easy and quick. For both models, there is not much force needed to ignite the engine.

Two models operate on dual AC and DC outlets. However, the power outlet from EU3000iS is stronger than from EU2000i. Though none of them support USB ports, this does not really matter much after all.

One cool thing is the EU3000iS is supported with Honda advanced inverter technology that can produce cleaner power. This kind of technology, according to Honda, is the best choice for electricity-sensitive equipment. 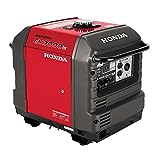 We hope this article has provided you with enough information between Honda EU3000iS vs EU2000i to make the final decision. If your budget is not too tight, Honda EU3000iS is worth considering its power stability and power time. If you want a more portable and affordable generator, you should go for EU2000i.