Predator 2000 and 3500: Which portable generator is the better option for you? Still, have no idea? Let’s scroll down to find the answer!

Both machines run on gasoline like most of the models on the current market.

Predator 2000 uses a 79.7 cc OHV 4-stroke engine, which can produce 1600W. When reaching the maximum speed, it can boost the wattage up to 2000W. The machine only supports the traditional recoil.

Meanwhile, its competitor, Predator 3500, is equipped with a more powerful engine, which is 212 cc OHV 4-stroke. The normal wattage and maximum wattage of this engine are 3000W and 3500w, which are nearly double that for Predator 2000. The starter of Predator 3500 is identical to the Predator 2000. You can only pull the handle to start both machines.

When testing, the energy consumption level of Predator 3500 tripled that for Predator 2000, whose figures are 0,24 GPH and 0,08 GPH, respectively.

When having sensitive electronic devices, you can use both the machines for your house because they have the THD below 5%. Therefore, the system output current has little distortion.

Because of the heavy design, the Predator 3500 is updated with four wheels at the bottom to support when moving around. With Predator 2000, you have a handle on the top without wheels. However, this machine is not too heavy, and the wheel is clearly unnecessary.

Another advantage of Predator 3500 over 2000 is the large LCD screen, which allows you to see the running time, the outputs, and oil level.

Predator 2000 also has an oil indicator. However, it is in the form of a LED light.

The noise level is also a factor that consumers concern the most. Predator 3500 is much louder with 65 dBA, while the noise level of Predator 2000 is only at 57 dBA. 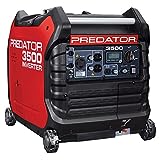 To sum up, after reading the comparisons between “Predator 2000 vs 3500”, you have known that the Predator 2000 is a smaller version of Predator 3500, which has a weaker engine and more compact design. Although there are many similarities between them, we lean towards the Predator 3500 for its power, friendly display, more AC outlets.