These days, it can be overwhelming to purchase any product as the market is flooded with new brands and models every day, and choosing a bandsaw is not an exception.

Even though you have shrunken your options down to Grizzly G0555LX Vs Rikon 10-324, it’s still a tough call to go with either machine. Don’t worry! Today, we’ll provide you with an in-depth comparison between the two to see which one is superior. Stay tuned!

The price difference is not much; both products come to the woodworking market at around $1400, which is considered quite a lot compared to other machines of this category. Let’s dig into the details to see if their features are really worth the money you spend.

In terms of design, Rikon 10-324 looks a bit bulky compared to its opponent – Grizzly G0555LX. G0555LX features a main color scheme of light grey and Persian green, which we found to be aesthetically pleasing. What is more, G0555LX comes in smaller measurements, adding more compactness and portability.

In fact, Rikon 10-324 is actually more lightweight than G0555LX, being around 215 lbs. This is probably because most parts of G0555LX are made of cast-iron, which is extremely sturdy and long-lasting.

Rikon 10-324 looks like a decent bandsaw with rock-hard construction to assist you in heavy-duty woodworking jobs; you can occasionally use it to cut metal, but we don’t recommend this.

To cut through metal, you’re going to need a bandsaw with slow speed, and Rikon 10-324 is not one of them. However, you can sometimes use it to cut really thin metal, just make sure you’re not pushing it too hard.

Grizzly G0555LX features an aluminum fence, which is not a bad thing, but cast-iron material is more appreciated; in return, it comes with a miter gauge and a magnifying window for ease of adjustment.

As for Rikon 10-324, the fence is designed to be extra tall for more support when ripping or resawing lumber. However, a miter gauge is not included.

You can take advantage of the quick-release tension lever of the Grizzly G0555LX, which allows easy blade removal and replacement.

Rikon 10-324 also has this feature, but it’ll take you quite some time to get used to it. After that, blade removing will literally take you less than one minute, while readjustment will probably take a little longer, but not difficult at all. 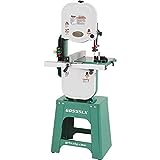 That’s a wrap for our comparison of Grizzly G0555LX Vs Rikon 10-324. Have you made up your mind yet? Both products have their pros and cons, but if we had to choose one, we’d go with the Grizzly G0555LX because of its convenient miter gauge as well as the slight price gap.

If you’re a woodworking shop owner, we recommend the Rikon 10-324 because its robust construction and butter-smooth blade can handle pretty much everything.

>>> The 10 Best Cordless Band Saw For The Money