Honda EM6500SX and EU7000IS: Which portable generator is the better option for you? Still, have no idea? Let’s scroll down to find the answer! 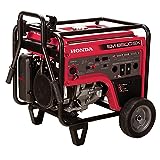 Even though these two products have the same power at the normal running mode of 5500W, Honda EU7000iS will be a better choice if you want a strong generator in any situation.

With these two options, you can choose the booting function among traditional pull or electric starting and remote starting, which is pretty much convenient for using.

EU7000iS also offers more effective running options with less fuel consumption and longer running time, while the energy consumption level of EU7000iS is only 0.32 GPH which is almost half of EM6500S (at 0,63 GPH).

Besides, if you think that the two machines are too heavy for you to move, Do not worry as they both have a handle and two wheels for easy and convenient transport.

One of these two generators’ remarkable features is that they both offer conventional switches for your ease of use.

Additionally, you might wonder, “Why does the EM6500S consume so much fuel in such a short time?” It offers 6 AC drives and 1 DC drive, while you only have 2 AC drives with EU7000iS. Thus, EM6500S will be the right one for you if you have many electric items running simultaneously.

Another special feature of these two machines is that they have a data control center that indicates the produced power and the fuel gauge, which is great for managing the generator.

That is a quick view of “Honda EM6500S vs EU7000iS”. Each version has its strengths and weaknesses, but Honda EU7000iS might be a better option due to its lightweight and energy-saving features. Hope you find the right generator for your need soon!